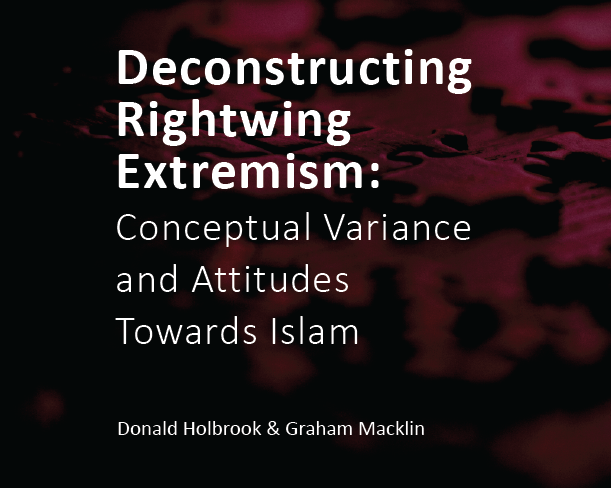 The purpose of this report is to map, conceptually and empirically, the diverse elements that constitute rightwing extremism. The aim is to offer readers a guide to this complexity and an appreciation for the numerous ideas, actors, and outcomes associated with RWE. The report is divided into two parts. The first focuses on the conceptual issues associated with RWE while the second explores how this complexity plays out in practice by examining various ways in which RWE has framed and reacted to Islam. This case study was selected as it illustrates the intricacies of varied and evolving RWE responses and because Islam and Muslims are often a major target of RWE violence and hostility.

In Part 1 we caution against describing RWE as a single movement or an ideology given that those associated with RWE, overall, lack the common bonds that bind members of a movement together. We explore the substance of this complexity and summarize the key features on a schema focusing on actors, ideas, and outcomes associated with RWE.

In Part 2 we illustrate, with reference to this conceptual complexity, how a plethora of mainly European RWE approaches to Islam underscores the pluralism of ideas and interpretations within RWE. This ideological plurality steers its proponents in divergent directions and results in varied outcomes. Not only do right-wing extremists, including those inspired by white supremacism, nationalism, and cultural nativism, adopt divergent positions on the issue, their approach ranges widely from co-optation and inspiration to non-engagement and outright hostility. These divergent positions, in turn, differ depending on local contexts, frames of reference, core beliefs, and individuals’ interpretations of each of these factors.

This heterogeneity has important implications for practitioners, policymakers and those who study RWE movements. Importantly, perceptions of threat are not constant or consistent across RWE movements. Varied threat perceptions can, in turn, produce different types of violence and extremism, with a diverse and inconsistent list of potential targets for violent acts, potential allies, and perceived constituents among RWE actors.